Conceiving a name and a logo is like giving birth. It took time to translate all of my feelings and goals into a name and an icon to represent the Templo Do Ser.

It started as a little seed of thought and then I began to nurture it daily with my love. The seed then grows within you until it is time to share it with the world. For us here at the temple now is the time. Below we present the details of how I came to find the name and logo.

The birth process started on  Kauai which is my second home. The center of the logo represents birth, it shows a pregnant woman, as well as the silhouette of the Kalalea Mountains in Anahola on Kauai. Kauai is a very sacred land, where everything starts and where everything ends. When the Dalai Lama visited Hawaii in 1994, he asked his tour guides to take him to two specific places in Kauai, Polihale and Anahola. Polihale for being the place where souls leave for the next World, next existence, and Anahola for being the place where souls arrive on Earth and from where we can see the Kalalea Mountains that curiously has the shape of a pregnant woman lying with her belly up with your hands in the form of a prayer in the heart center.

The form of Red Disc that contains this image represents the Sun, the maximum expression of male energy. In this way, we combine male and female energies to achieve the harmony of Being. The red color also represents blood, our Sacred Water. Its Golden Wings together with the symbol of the Red Solar Disc represents Divinity with its royalty and power. The winged Solar Disk is a very ancient symbol depicted in many ancient cultures such as Egypt and Mesopotamia.

I thought long and hard about the name of the temple and after much thought I chose the “Temple of Being” (Templo Do Ser) which is what we set out to do, that is to teach our guests a new way to be in this world.

Creator of the Templo Logo 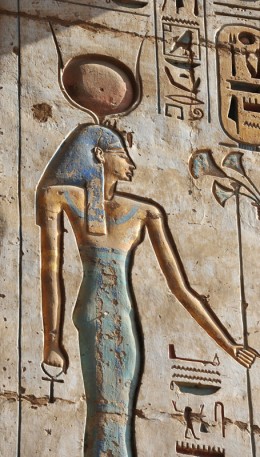